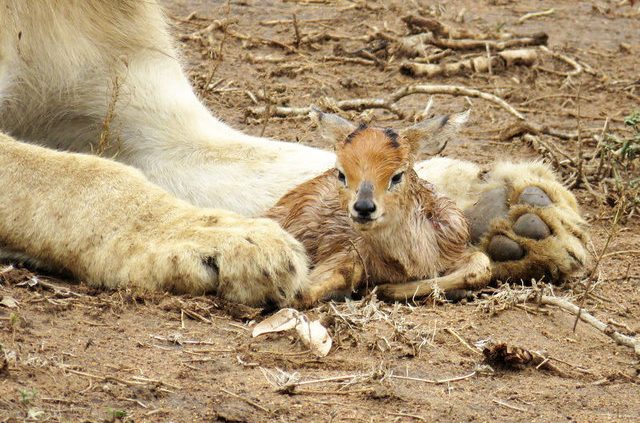 A starving young lion certainly managed to get his claws into a tasty little snack.

This intense video keeps you on the edge of your seat as you wait to see how it plays out….

The awesome footage was captured on film in the Kruger National Park (Get free nights and other specials here) by Graeme Mitchley (45), Deputy Principal at a School in Edenvale, South Africa!

Graeme was excited about the sighting and told LatestSightings.com: “My wife and I had seen a lot of lions in that area in 2016. Due to the drought, the animals came to drink and the lions were there waiting for them. On this particular day there wasn’t an animal in sight, never mind any lions. I commented to my wife that I would love to know where they had all got to. A few minutes later, out of nowhere a lion came walking out of the dry bush with something in its mouth.

At first, it looked like a lioness carrying her cub. However, at second glance, it turned out to be a young male carrying a newborn antelope.

The young lion carried the antelope down into the dry riverbed where we lost visual, but could still hear the antelope bleating.

The lion went into the riverbed also because there were white-backed vultures, hooded vultures and marabou storks in the vicinity hoping to take off with the buck. I think this was pure opportunism on the part of the lion as he must have stumbled upon the newborn whilst walking through the bush.

I am not sure what happened to its mom but she may have been grazing and wandered a bit too far off from her youngster.

While the sighting was being played out, adrenaline was flowing! But watching the video, I could hear the little buck bleating, which wasn’t nice at all.

My wife was almost in tears and given a chance, she would have rescued the poor thing.

We visit the Kruger often but this was a rare sighting for both of us.

That’s why the KNP is the best place on Earth, you never know what lies in wait around the following bend!”

Nose-to-nose with one big cat!
Scroll to top